For months we’ve been hearing and reading concern that the Trump-Democrat split in the U.S. is worsening and that many, thousands or millions, on the losing side next Fall will refuse to accept the results—generating violence ranging from riots lasting weeks or months, to a form of Civil War. With the Impeachment process now underway, and early speculation that it will be rejected, but unresolved, acerbating party lines, the split gets worse—and the probability of a compromise more middle of the road candidate like Biden worse. He has lost his lead in latest polls. Election of a socialist Democrat makes the prospects for an election battle leading to violence and collapse post-election more likely. 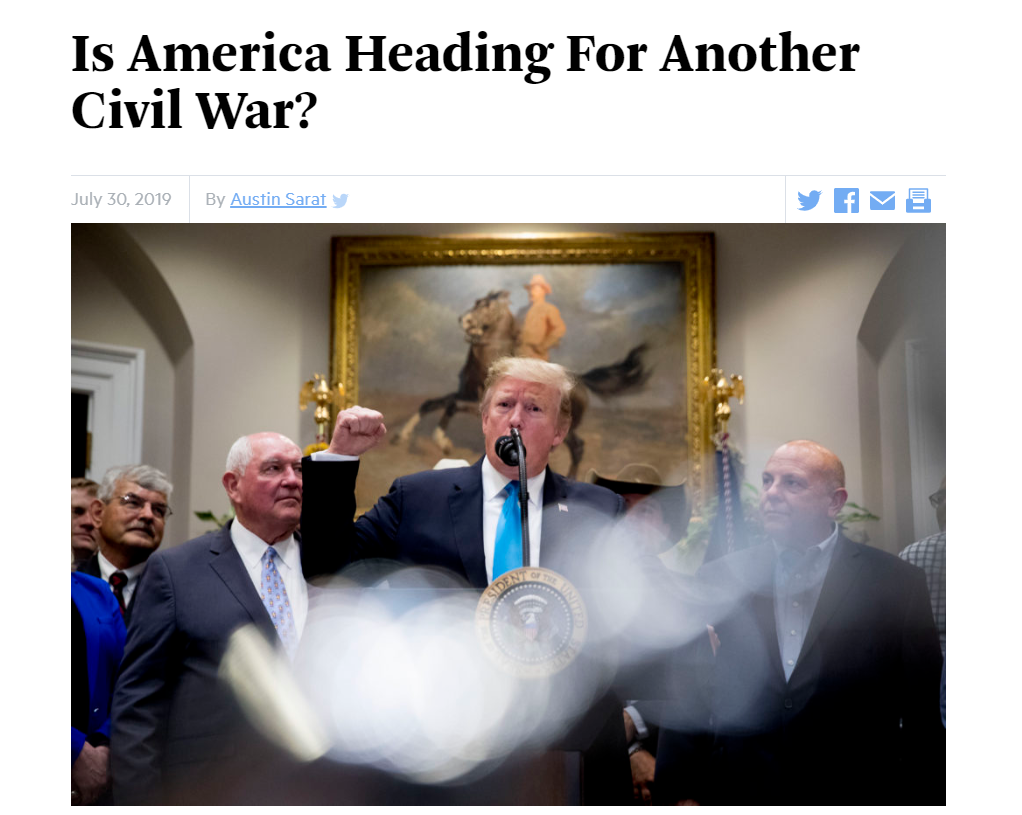 Quoting from this article: “If the president wins (despite, again, losing the popular vote) will Democrats, having lived through four years of a Trump presidency, accept the legitimacy of his re-election? Will racial minorities feel ever more strongly that they are in danger of persecution?  And, if a Democrat wins, will the president claim that the election was rigged and refuse to relinquish power? Would he condone violence as he intimated in March of this year when he noted that he has the “support of the police, military and ‘Bikers for Trump’” and that “it would be very bad” if they had to get tough on his opponents?  Despite Trump’s provocative language and the warning of Michael Cohen, Trump’s former lawyer, that “Given my experience working for Mr. Trump, I fear that if he loses the election in 2020, that there will never be a peaceful transition of power,” leaders of the Republican party have refused to take this possibility seriously.”

In our view, the bigger violence risk is not political protestors, but gangs and bad people who will take advantage of any rioting, strife, to loot and do worse.  You can readily and very reasonably imagine a political protest in big cities post-election where bad people join in the protest, and then start looting stores, arson, clashes with police, deaths from people defending their property—and an uncontrollable escalation in violence, spurred on by social media, disinformation, panic, and more people figuring out this is a great time while police are overwhelmed to head out on a crime spree.

Some people speculating on this threat also reason that even if there is no Civil War like violence, the stock market and economy will fall during this unrest, adding economic strife and the oft heard economic collapse threat.  Of course, this is all impossible to predict, but more cause for concern and encouragement to prepare for the worst.  If this does happen, Fortitude Ranch will open for members to take refuge and ride out the storm in safety.

Photos of an “Economy” room at FR WV

While most members tour a FR location before they join, we also sign up new members who are too busy to come out and visit a site.  Some have asked that we include some photos of a typical room in our newsletter, so here is an example.  The bed in bottom of this bunkbed converts to a sofa. 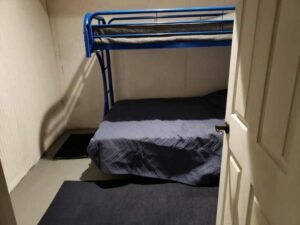 In addition to storing clothes and supplies in your private room, members are also welcome to customize and fix them up:  add carpet, photos, etc.  Photo below is view of other side of room (which is about 10 feet by 10 feet.) 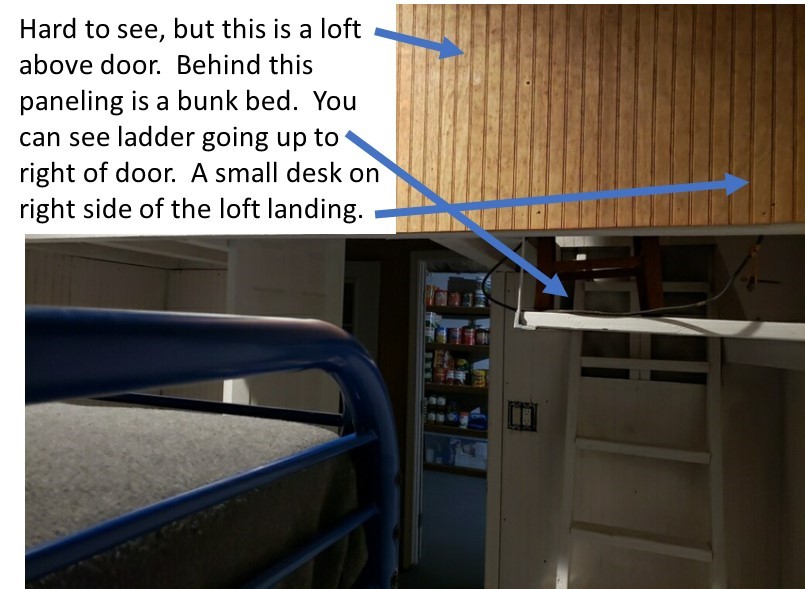 There is a hall outside the room, and door on other side is open to food storage room.  The entire basement area, with 12 underground rooms, is covered by two inches of oak wood, a metal tray, 8 inches of reinforced steel concrete, and three feet of earth—fantastic radiation shielding.  Rooms are cool in summer, and not too cold in winter.  Large wood stove with air blower fan can circulate air into the rooms.  In a pandemic situation, the blower would not be run—and each room has its own 2-inch PVC air vent up and out, venting outside (after 180-degree turn) separated from other air vents.

While our central Colorado, mountain location is generally not in the path of any likely fallout from either a nuclear attack or nuclear reactor accident, in a major nuclear war there could be serious levels of fallout throughout the northern hemisphere.  We’re thus adding underground sleeping chambers to a building at FR Colorado that does not have a basement.   Windows were added to allow some light in what before was a crawl space.  In a disaster, we’d take stockpiled sandbags and fill them with clean (not radioactive) dirt for additional shielding.  Members who have an above ground room would still have their private space for storage, use, but sleep in an underground, radiation shielded berth. 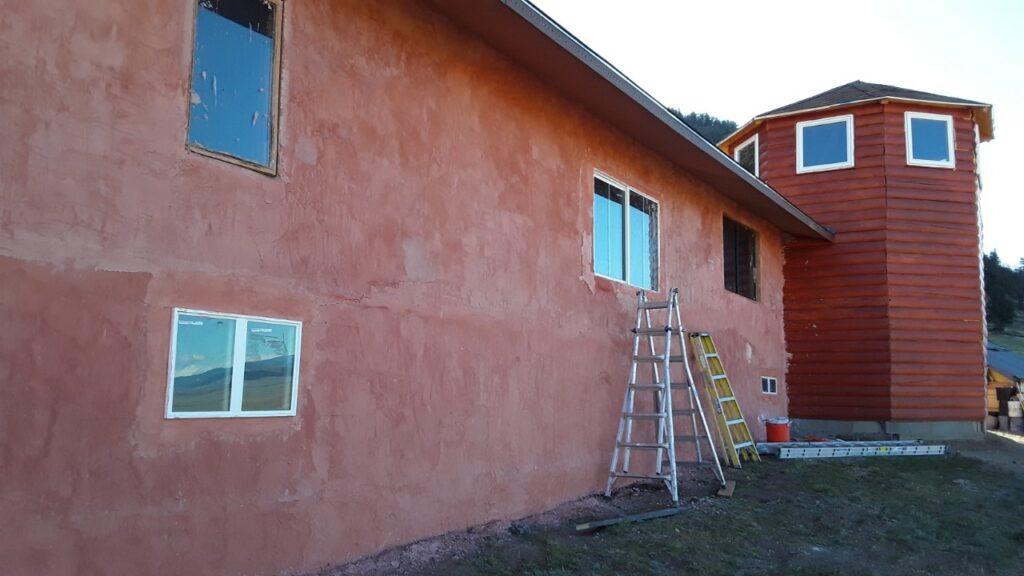 House is the lower corner of compound.  An existing Guard station on boulders is hard to see, but on left side.  Future buildings are going to be built uphill in the trees.

While our website, www.fortituderanch.com, provides a wealth of information and videos, most want to tour one of our locations before joining.  We charge $25 per group for a tour, primarily to deter poor preppers who have no intention of joining but like to see our preparations.  The tour takes at least an hour.  Tours must be scheduled days in advance, so email if interested in seeing our WV or CO locations, manager@fortituderanch.com.

We are very fortunate to have another experienced, former Army, staff member in residence at FR WV.  Steven Rene joins Ranch Manager Dave Jones as Operations Manager of Fortitude Ranch WV.  His duties include over site of daily operations during times of peace and crisis.  He is also the Director of Sales, Marketing, and Public Relations for the ranch as well. 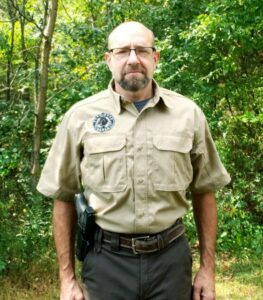 Steven served our country for nine years in the US Army as a Pershing Missile crew member for 4 years. The Pershing II was a mobile, tactical nuclear system, requiring a Secret Clearance.  His last five years were served as an Intelligence Analyst, deployed with the 1st Cavalry Division for Operation Desert Storm, the first heavy division in theater. As a result of this wartime service, Steven was exposed to Sarin nerve agent in Iraq.  Upon his Honorable discharge he attended college and earned a Bachelor’s degree in Humanities and started his own international non-profit organization, helping victims of the 1986 Chernobyl nuclear disaster. He served in the country of Belarus for 12 years remodeling and updating their clinics and running a small ranch for social orphans.  This construction experience is another great fit with Fortitude Ranch.

Steven is very excited to be part of the FR system, helping make FR the best possible place a person can go in a time of Crisis or for good times recreation and enjoyment.

Own your own private house and property—but have the full protection of Fortitude Ranch, your neighbors there.  Two hours west of DC in remote but accessible area of WV, surrounded by George Washington National Forest.  If interested, contact Steven at steven@fortituderanch.com.

To build out our Colorado and Wisconsin locations, and hopefully several additional locations. we’re selling equity in Fortitude Ranch to raise funds.  We wish that anyone who wants to invest could, but the federal government believes they are smarter than you and that you lack the responsibility to make your own decisions—so they dictate that unless you are higher income, it is illegal for companies to offer equity for sale in the “Regulation D” offering we’re doing.  The Feds consider you an “accredited investor” if you have an annual income exceeding $200,000 ($300,000 for joint income) for the last two years or a net worth exceeding $1 million.   The “accredited” word is absolute bravo sierra—it has nothing to do with your experience or investment skills, it’s strictly based on income, bureaucratic nonsense.  If you do qualify as an accredited (rich) investor and want to consider investing, please email Drew at manager@fortituderanch.com and he will send you the equity offering memorandum. 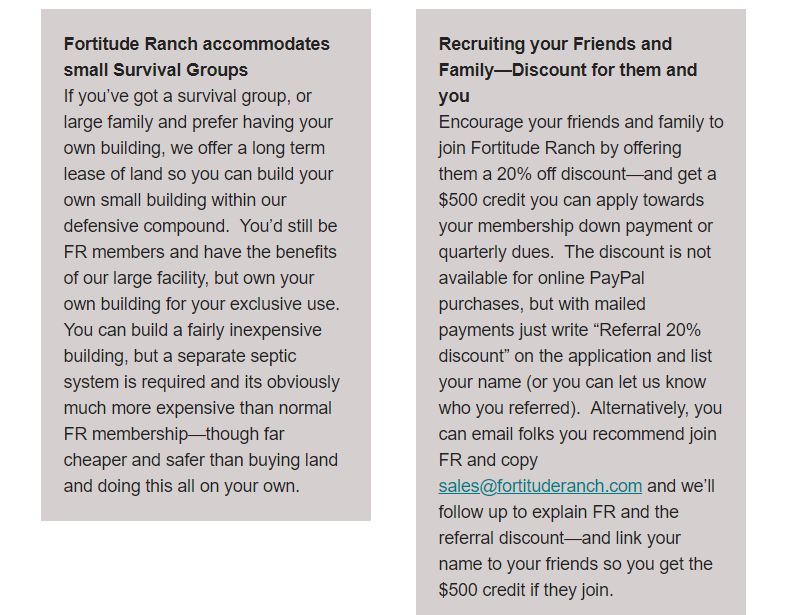 NOTE:  if you’d like a PDF copy of this newsletter to send to friends, email manager@fortituderanch.com and we’ll send it to you.

This may be a good place to introduce yourself and your site or include some credits.